The club values very highly its youth development strategy which is underpinned by the junior coaching programme. This programme provides an ideal foundation for juniors to maximise their individual skills and talents by helping them achieve their personal goals.

To provide our young players with all the basics they need to enjoy playing squash the Club runs several weekly group squash coaching sessions on Mondays after school and on a Saturday morning. Sessions are available for beginners through to advanced level players with mini squash available for younger children.

Our group coaching sessions are open to members and non-members and are organised as termly courses booked online.

Junior teams compete in the Sussex league in all age groups normally playing in mixed teams of four. All players are ranked according to ability. Junior players are encouraged to join the junior box leagues and progress to the adult box leagues once they feel confident enough.

Are you free on Wednesday or Friday evening? Why not join our squash club sessions?

We hold mix-in squash sessions for members on Friday evenings and Wednesday evening is doubles night. See our Squash and Racketball Timetable below for more details.

Why not give Racketball a try?

The club is a thriving environment for racketball  (also known as Squash 57). On Sunday afternoons we hold open racketball sessions and have teams competing in the Sussex Racketball League.

Competing in a variety of leagues, our team squash is thriving and successful. Each season we enter a number of teams into the Sussex League, in various divisions. We also have a ladies squash team competing in the Sussex Ladies League.

We organise monthly box leagues for adults and juniors featuring players of all abilities and ages. Players are promoted and relegated each month so all players can enjoy squash against players of similar standard. Played in a friendly atmosphere, our doubles leagues are extremely competitive. The more advanced junior members are encouraged to join in and learn the art of doubles play against some of our more experienced players.

Healthy competition is encouraged within our squash and racketball box leagues. These internal leagues are open to members. 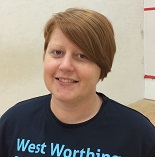 Kelly Eastment has been our Head Squash Coach since February 2017. She was named England Squash’s Coach of the Year 2017/2018 having been a coach for more than 10 years and playing Squash for over 20. Kelly is a UKCC England Squash Level 3 Squash Coach. She is experienced in teaching both squash and racketball in individual and group scenarios, from ages 4 to 75+ years.

During her playing career she has played for Sussex at every level from Junior through to Ladies. She has participated in the South East Regional Girls team going on to represent them at the finals in Manchester. Her highest England ranking is 3. Kelly has also been assistant coach to the Sussex Girls Team. Kelly is captain of our Ladies Squash team.