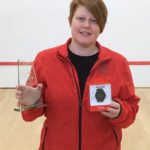 Congratulations to West Worthing Club (WWC) coach Kelly Eastment, who was named England Squash’s Coach of the Year for her outstanding commitment and contribution to the sport. Kelly’s coaching talent was honoured in the Polar Squash Workforce Awards at the 2018 Dunlop British National Championships which were held in Manchester.

A leading light in grassroots squash, Kelly has been coaching both junior and senior squash players at WWC for 18 months and was delighted to receive her award, saying: “I feel privileged to have won and was very shocked as I didn’t know I had been nominated.”

Her unique coaching style has not only won her praise personally, but has worked wonders for the club with a boost in the popularity of the game. Club Chairman, William Naunton, is delighted with the impact Kelly is making, commenting: “This is a thoroughly justified award and we are delighted to have the country’s top squash coach at West Worthing Club. Kelly is a key member of our coaching team and works with players of all abilities, from beginner to county level and beyond.”

As club coach, Kelly’s passion for the game is clearly infectious, as she adds: ”I love the psychological side of the game, building rallies, experimenting on new shots, seeing how every player plays differently. How a game can be altered by how you feel mentally, whether you have had a hard day or walk into the game feeling confident.”

Kelly balances the competitive and friendly aspects of the game with her successful range of training drills, fitness classes, drop-in sessions, as well as half-term and summer camps for juniors. Her top tips for new members taking up squash, include: have fun, work hard, play lots, work on positioning and keep focused.

Thanks to Kelly’s efforts, the club has seen a particular spike in interest at the junior level too. Kelly’s determination to support the county’s younger players has also helped to increase junior participation across West Sussex and beyond, with Kelly cementing partnerships with local schools, colleges and groups of children with learning difficulties. Kelly’s approach to coaching has also translated into more tournaments for the club too with participation in eight squash leagues.

Kelly, who lives in Worthing, has a well-established background in squash having played nationally until the age of 17. She has been a coach since she was 16, achieving her level three qualification before she turned 20 and has trained British Juniors at the Olympic stadium.

West Worthing Club is recognised as one of five Hub squash centres in Sussex. There are currently three men’s teams, one ladies team and two junior teams.  Squash members can play on six courts, one of which is glass backed with a viewing area for 100 people. William Naunton concludes: “At West Worthing we are lucky to have some of the best squash and tennis facilities in the south of England and strongest group of coaches any club could wish for.”