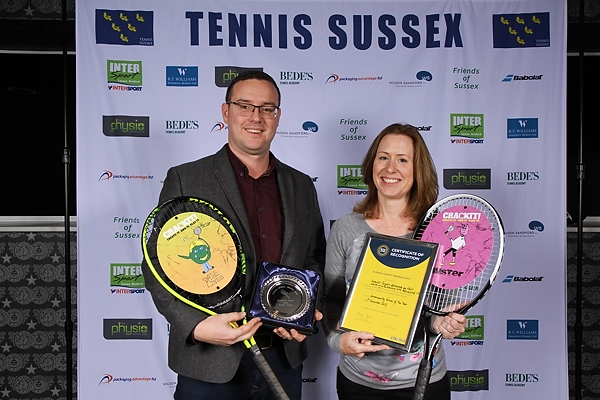 West Worthing Tennis Club (WWC) were delighted to receive the Community Venue of the Year Award for rolling out their impressive ‘Crackit Tennis’ programme this summer. Popular WWC were presented with the coveted award at the recent Tennis Sussex Awards ceremony at Amex. The creation of WWC’s Crackit Tennis programme, in partnership with Future Proof CIC, helped introduce more than 80 local children to tennis, many of who had never picked up a tennis racket before.

Crackit’s successful debut and award is a massive achievement for the Club as William Naunton, WWC Chairman, explains “We are delighted to have won this award and to have been involved in Crackit Tennis, which has been an inspiring tennis programme for many local secondary school children. As a Community Amateur Sports Club, West Worthing Club is committed to bringing tennis, and our other sports, to as many people as possible regardless of their age, ability or background. Our grateful thanks go to Futureproof for pulling all aspects of the project together and to our Club coach Simon Ostler for giving the children such a fun and engaging start to tennis.”

The locally-funded Crackit scheme was professionally structured by WWC’s coaches and was offered as an after-school club to encourage children over 12 to grasp the basics of tennis and exercise more. Spanning four, six-week courses Crackit covered every aspect of tennis both on and off the court. Coaches taught the basics of the game with fun-filled tennis-related exercises and team games to inspire everyone to pick up a racket and enjoy the game. Children also had the opportunity to personalise their rackets with comic art sporting characters – an inspiring combination of design in the classroom with on-court lessons. The final week proved a friendly, but competitive affair, as children played in their team t-shirts with rackets emblazoned with their respective characters. Youngsters who completed the course all received a racket adorned with their sporting characters.

WWC piloted Crackit to Worthing High School in 2016 supported by local companies Future Proof CIC and Pleece and Co. Karen Hayler, Business Manager at Worthing High School, describes what Crackit has meant to the school, “In spring 2016 we discussed with Tom Hall at Futureproof the opportunity to extend our Crackit project to tennis. We asked West Worthing Tennis club if they would work with us and a great partnership was formed. Four cohorts of young people have now benefited from the programme, enabling them to experience tennis and encouraging them to take up the sport following the programme. The project has been a great success.”

Tom Hall, Future Proof CIC, is equally thrilled by Crackit’s popularity, adding “by fusing design and tennis we make both more accessible to young people. Partnering with West Worthing Tennis Club and Worthing High proved really effective – the Club’s coaches made the sessions fun and inclusive, while the teaching staff at the school really brought the design part of the programme to life. It was great to see the four groups get creative on the court and back in the classroom!”